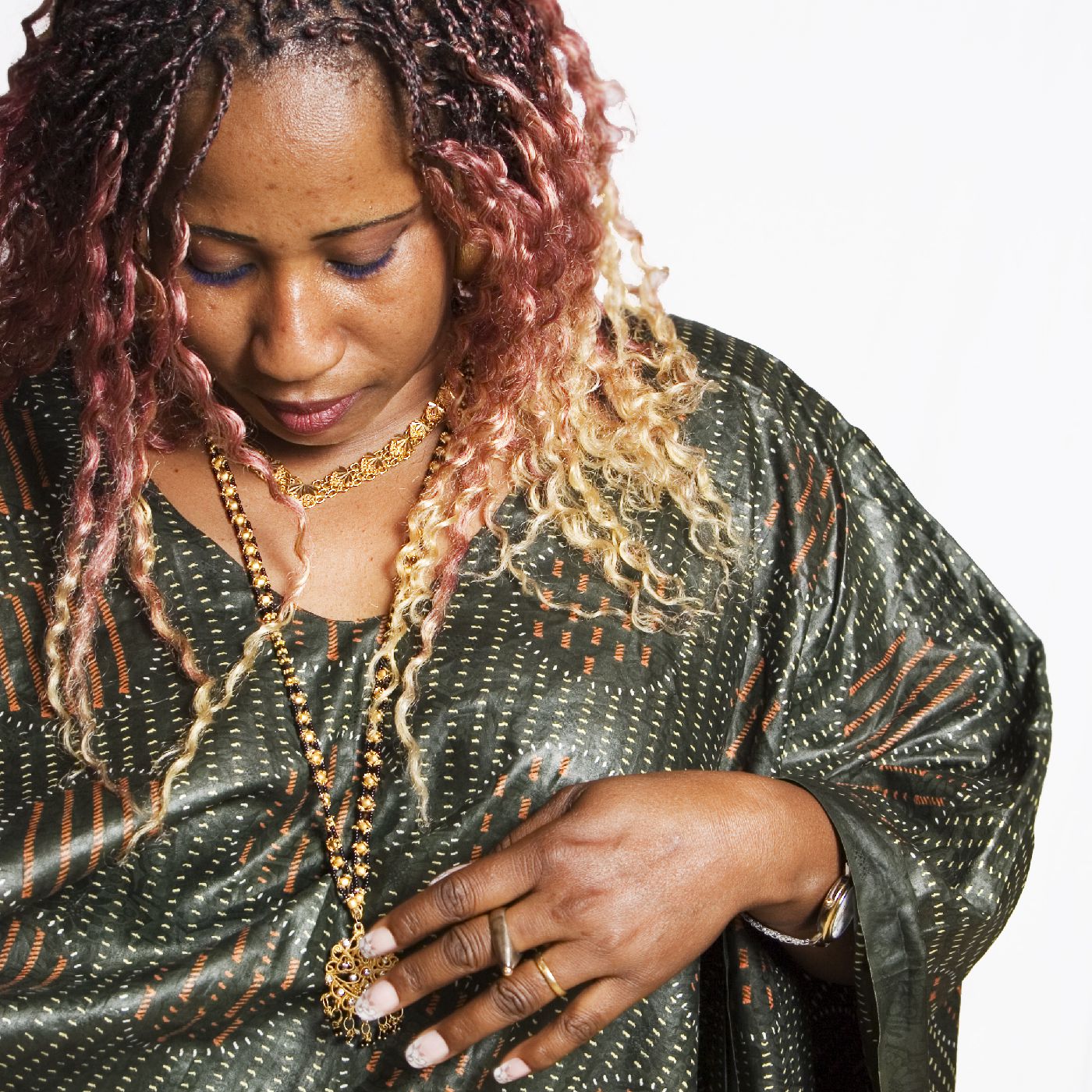 FATOUMATA DEMBÉLÉ was born in 1972 in Bobo-Dioulasso, Burkina Faso. Her family is from Burkina Faso and Mali. She is the daughter of griot parents and has thus inherited the tradition of these musical messengers and MCs, accompanying her mother to visit ceremonies and rituals. Her father built balafons, an instrument he also played.

At 25, she worked exclusively as a griot at ceremonies, rituals and festivities. At these performances in the Dioula language she was accompanied by djembe players, singing in the Manding language whole orchestras, playing traditional or modern instruments, were often at her side.

In 1989 she participated with her group at a music festival in Bobo-Dioulasso. After this performance she was invited to join the world-famous group FARAFINA as their lead singer.

Since 1999 she has been touring Europe and the world with FARAFINA. She contributes her own compositions, sings solos and dances. She performed with FARAFINA at the 'Millenium Sacred Rhythm Festival' on Bali (1999), played in the 'Haus der Kulturen' Berlin, at the Tanz Festival Rudolfstadt and did many concerts in Italy (all in 1999). Several times she plays with FARAFINA at the famous WOMAD festivals (founded by Peter Gabriel) : WOMAD USA Seattle (2000), Reading WOMAD Festival (2000), WOMAD Las Palmas (2001).

In 2000 the tours with FARAFINA took her to Switzerland, Portugal, France, Spain, Italy, the Netherlands, Austria and Germany where they played the World EXPO 2000 in Hannover.
The same year she took part in the recording of Farafina’s CD >Kanou<.
In Burkina Faso she performed with her own group under the name of TIM TIM at a competition by the “Coordination des Associations pour la lutte contre le Sida” (coordination of associations for the fight against AIDS). Among the 30 groups she won the first prize with her song ‘Sida Ka Taa’. She was invited to perform at Burkina’s main TV station and gave a concert at a reunion of doctors from her country.

In 2001 and 2002 she toured again with FARAFINA in order to promote the release of their CD >Kanou<. They toured in Switzerland, France, Spain, Italy, Germany and played in Israel at the 'Jerusalem Freedom Festival 2002'.

In 2002 she took part with FARAFINA in the project SIRAFARAN ("crossroads") on the occasion of the EXPO 02 at the Neuchâtel Expo site in Switzerland. SIRAFARAN is a collaboration between the group FARAFINA and Swiss jazz musicians MATHIEU MICHEL (tp), BERTRAND BLESSING (dr), DRAGOS TARA (b) und LAURENT ESTOPPEY (sax).

In 2003 she performed with FARAFINA at the film festival FESPACO in Ouagadougou, capital of Burkina Faso.
In the same year she recorded the song 'Delie' ("acquaintance") as a duet with the famous blind musician SOLO DIA KABACO. They also produced a video clip of the song which is still being run on TV in Burkina Faso and Mali.

In 2004 she returned with FARAFINA to Switzerland, France, Britain (AFRICA OYE Festival), Belgium, Italy (FOLKEST 2004), Germany, Croatia, Slovenia and Tunisia.
She was also invited as a featured solo singer to record three songs on the CD >Sira Fila< by the group BEKADIYA, a project organized by the balafon player MAMADOU DIABATÉ who lives in Vienna, Austria. She performed several concerts in Austria with the group.

In 2005 she went back on tour with BEKADIYA. She also worked with a new project together with ACHIM TANG (b), MAMADOU DIABATÉ (balafon) and LUKAS KNÖFLER (dr). In addition to all that she performed with her own group (BUSKERS BERN 2005, et al.).

In 2006 she continued her work with BEKADIYA. She also joined the group TAFFETAS, whose members were NANA CISSOKHO (kora, voc), MARC LIEBESKIND (g) and CHRISTOPHE ERARD (b, voc) on tour and recorded the CD >Caméléon< with them. In addition she gave duo concerts with her regular kora player NANA CISSOKHO and with her own group in Switzerland. She also pruduced her first CD under her own name.

2007 is the year of release of her first CD under her own name, Fatoumata Dembélé. Her CD >N‘naniba< had come out in early march 2008.

In 2008 Fatoumata continued her solo career and was on tour with MAMADOU DIABATÉ.

2009 was a year of new projects but also the continuation of old collaborations. In spring Fatoumata started working with the group DIWANE AFRICA by senegalese percussionist MODOU DIOUM. They performed several times in France.
MAMADOU DIABATÉ renewed his group BEKADIYA. They regularly play in Austria.
In August Fatoumata played with FARAFINA in Colombia.
In autumn Swiss pianist MARK KOCH started a new project of jazz and world music. Fatoumata is the featured singer.
Senegalese kora player SEKOU KEITA invited Fatoumata to join SEWA BEATS and she started to regularly participate at concerts by the DO YOU SPEAK DJEMBE ? by DOUG MANUEL and PHILIPPE FOURNIER. The music of DYSD is a clever combination of two different cultures: the western classical music and the rhythm of African percussion. The music is performed by a group around kora player SEKOU KEITA and the ORCHESTRE SYMPHONIQUE LYONNAIS under the direction of PHILIPPE FOURNIER.

In 2010 Fatoumata worked again with FARAFINA (they did tours in Russia and a festival in Malaysia9 and with BEKADIYA.

In spring 2011 first recordings for the new CD by FARAFINA were made in Bobo-Dioulasso, Burkina Faso, which eventually came ou in 2013 under the name >Denti Fere<.
She also collaborated with German saxophonist SIGI FINKEL and balafon player MAMADOU DIABATE.

In 2012 Fatoumata began working with senegalese kora player AMADOU DIOLO and his group DIOLOLOU. She participated in the recording of the CD >Africaco< .

Between 2014 and 2017 Fatoumata was a teacher for the project „Beyond Cultures“, which taught Swiss children traditional music from Switzerland and abroad.

In 2015 Fatoumata was part of the project Gypsy Festival and did several concerts in Switzerland with them.
2015 Fatoumata was founding member of the group ORCHESTRE BENKADI together with balafon player MAMBOUROU DIARRA, guitar player ANDREAS BUGS and saxofonist BEAT MEIER. ORCHESTRA BENKADI mixes griot singing by Fatoumata with polyrhythmic balafon playing and jazzy themes and backgrounds.

2018 Fatoumata recorded for the new CD by AMADOU DIOLO >Futur Continent<.
In the same year she was a featured soloist at a concert project «Sing in Thun» by choir leader Phoebe Fuller.
In 2018 she did some concerts with FARAFINA.
She still also did concerts under her own name and organized dancing lessons and workshops.